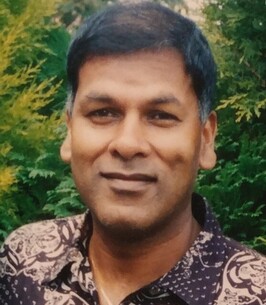 Edmund Arthur Roberts passed away peacefully at home on Sunday August 21st at the age of 77. He is survived by his beloved wife, Synie, of 55 years, daughters, Priscilla (Steve), Charmaine (Andrew), cherished granddaughter, Diamond, five sisters, one brother and many nieces and nephews.

He was born in the West Indies on September 28, 1944 on the tiny and beautiful island of St. Vincent and the Grenadines to his parents, Evelyn and Solomon Roberts. The fourth of ten children, Edmund had a profound love for his family, sisters and brothers.

At the young age of 14, Edmund travelled by freighter to live in England. In his youth, he was a wrestler at school, and an avid cricket player, enjoying the sport throughout his life. He was an amateur snooker player, winning a tournament and a big trophy.

Later in England he met the love of his life and best friend, Synie, and they married and had two beautiful daughters, Priscilla and Charmaine. They moved to Canada and settled there for the remainder of his life. Later, his eldest daughter, Priscilla, blessed him with the joy of his life, his granddaughter, Diamond.

He was very handy in his youth, and loved to use his skills to build and create many projects. When he was able he would help a lot of friends finish the basements in their homes, giving them his time sharing his skills, tools and friendship. He was an honest, giving man and had lifelong friends that he kept in touch with often.

Despite a disability caused by a motorcycle accident as a young adult, he worked hard to provide a beautiful life and legacy for his family. Later he was diagnosed with Retinitis Pegmintosa at age 45 and gradually lost most of his eyesight in two decades. In spite of this, he was very courageous and independent throughout the years, repeatedly continuing to make home repairs by feeling them with his hands.

Retiring early from a career as an Injection Moulding Setup Technician, Edmund enjoyed growing gardens, travelling the world and keeping up with current events. He has left his footprints in the sand vacationing on many islands in the Caribbean, and enjoyed spending Canada’s colder winter months in the warm sunshine of his first home, St. Vincent and the Grenadines. His love of gardening showed in his vegetables and prize winning flowers within the communities he lived in. He would generously cut a plant to gift anyone who admired all that he had grown. He also enjoyed sharing his vegetables with his friends. There are many Ontario and British gardens with flowers and plants that began from cuttings or seeds from Edmund’s gardens.

Many people were sponsored by Edmund and Synie to come to Canada from around the world. He was always helping others to have an opportunity for a better life and to follow their dreams. A true friend with a most generous spirit, Edmund was always happiest when his friends were succeeding and he always made himself available to give help and encouragement at less fortunate times. He was a very charming and giving man and was truly adored by many people. He would make friends easily at home and on his travels. He was a devoted husband and father. He will be deeply missed by all who knew him.

The funeral service will be held at Barnes Memorial Funeral Home, 5295 Thickson Road, Whitby, ON, on Thursday, September 1st, 2022 at 1:00 p.m., with visitation beginning at 12 Noon. Entombment will follow at Resurrection Catholic Cemetery, 355 Taunton Road East, Whitby, ON.

All rights reserved. This obituary is also archived at obittree.com