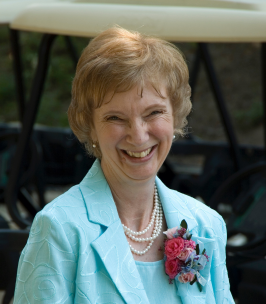 On Monday, September 12, Susan Thomas died after a brief battle with cancer. She was at Oshawa General Hospital, surrounded by family. Sue was 75 years old. She will be greatly missed by her husband, Wayne Thomas, her children Erin Thomas (Aaron Vegh) and Mike Thomas (Nancy Thomas), her grandchildren Lynn, Madeline, Brooke and Julia, and countless other family and friends. Sue is survived by her siblings Robert (Betty), Nancy (Joseph) and Joanne, and her siblings-in-law Nancy (Gary), Judy (Steve) and Peggy (Peter). She will also be mourned by her nieces and nephews Leanne, Craig, Sandy, Phil, Mark, Marcie, Kerry, Robert, Theresa, Jennifer and Christopher and their partners and families.

Sue was born December 9, 1946, to Robert Stanley Pollard and June Margaret Pollard (Smith). She lived her early years in Oshawa, Ontario. Sue was the eldest child in the family, followed by Bob, Nancy, then Joanne. The family encountered tragedy early when her father died in a workplace accident at General Motors shortly after Joanne was born.

Robert’s father, Norval “Buck” Pollard, stepped up. Grandfather extraordinaire, he played a huge role in the children’s upbringing. Remembering Buck’s warm, compassionate nature and unwavering belief in doing right by family, it’s easy to see where Sue learned some of her values.

The family moved to Whitby in time for Sue to start grade 7. She continued on to Henry Street High School, where she did well in school despite having no great fondness for math or Latin. HSHS was where she met Wayne, as well as others with whom she remained friends all her life—Dale McLeod is one. Dale was present in the last days of Sue’s life, to support her and her family through what was happening.

In her final year of high school, Sue attended a career week talk presented by Medical Laboratory Technologist Helen Keys—another figure who would become a lifelong friend. Sue had been considering becoming a nurse. In those days, though, laboratory technology was a new field and schools were willing to pay students while they trained. Sue became a lab tech.

Wayne and Sue married in 1968 at age 21, while Wayne was still attending the University of Waterloo. Mom worked in Kitchener. Later, Wayne’s work took them to Ottawa, Ontario, where Mom worked in a hospital and the couple lived in a semi-detached house with Jack and Carol Thompson next door. The two couples were to become lifelong friends, creating what their children would jokingly refer to as the “T Family.”

Wayne and Sue enjoyed many camping and canoeing adventures with the Thompsons and their other friends, in the early 1970s. In December 1974, Erin Louise was born. John Michael followed in June 1977. There was some dispute over whether he would be called John (Wayne’s choice) or Michael (Sue’s choice). For weeks, relatives discreetly asked how “the baby” was doing. Sue won that one—and so they became a family of four, Wayne, Sue, Erin and Mike.

The camping adventures continued. The family eventually upgraded to a tent trailer and enjoyed many adventures in parks around Ontario, especially Sandbanks and a small trailer park called “Ferguson’s Farm.”

In 1980, wanting to be closer to family, the Thomas family moved to Whitby and took up residence at 500 Peel Street. It was to become a beautiful house, but needed a _lot_ of work. Early features included a wall mural, mirrored tiles, a bathroom done up in fuzzy blue carpet, and a leaky basement.

Erin and Mike grew up enjoying close relationships with their Thomas and Pollard relatives. Wayne and Sue were relieved not to have to drive four hours from Ottawa for Christmas dinner each year. They developed strong friendships in their new neighbourhood, including the Doughertys, the Jepmas, the Foxes, and, especially, Jann and Don McQuay. And they reconnected with people they had grown up with and close family friends, such as Ruth and Paul Borchuk.

Sue started to work part-time at Ajax Pickering Hospital when the kids were young. She had many stories of late-night drives along the baseline road, when she was called in for an emergency in the middle of the night. In later years, she started working full-time, with hours that more closely matched the kids’ school schedule.

Sue always took pride in her work. She never stopped taking courses to upgrade her skills and stay current on new technology. She formed strong friendships in the lab as well, including one with Helen Keys—the woman who had initially inspired her to follow this path.

Sue pursued hobbies as well, including folk art, knitting and sewing. Somewhere, there is a photo of Wayne, Sue, Erin and Mike wearing matching orange turtlenecks that she made.

In 1984, Wayne and Sue bought a cottage on Ril Lake in Muskoka. The cottage is the home of many treasured memories, and the cottage community was home to some of Wayne and Sue’s dearest friends.

Sue was a loving, understanding, patient mother. She and Wayne made their home a welcoming place for all of Mike’s and Erin’s friends over the years, and were second parents to many.

They also shared their home with a series of beloved dogs over the years, from Molly their “firstborn” black lab, through Dixie the Welsh Terrier Terror, then Reba, Lady, Guinness, and finally Trisha. (After Dixie, Wayne and Sue went back to labs.) Sue’s beloved yellow lab Trisha will be missing her terribly. To understand what a strict dog parent Sue was, we need to be very clear that Trisha is not allowed on the couch. Because of this, in the evenings, Sue would sit on the floor and cuddle her while watching tv.

When the kids grew older and attended university (Erin at McMaster, Mike at Guelph), Wayne and Sue would make a circuit, leaving Whitby in the morning, taking one kid out for lunch and the other out for dinner, before they returned home again.

As Erin and Mike entered careers and marriages, Wayne and Sue welcomed Aaron Vegh and Nancy (Wilson) Thomas into their lives as extra children. They both continued to work, but with the birth of their first grandchild, Sarah (now Lynn) in 2003, Sue decided it was time to retire.

If she had been a wonderful mother, she absolutely shone as a grandmother. She loved Lynn, Madeline, Brooke and Julia with her entire heart and soul, and put all of herself into every moment with them. She was always happy to come on an outing, provide chauffeur duties, or attend a performance. “Grandma’s Day Care” was a huge part of each of their upbringings. Her gentle, encouraging manner made her a beloved confidante, and some of her hobbies are continued by her grandchildren.

She continued to embrace her creative side, too. In later years, Sue moved beyond orange turtlenecks and went on to sew beautiful dresses, adorable children’s clothes and extraordinary Halloween costumes for Erin, Mike and the kids. She even took up violin as an adult learner, playing in her first recital when she was in her 70s.

Sue enjoyed word games, from Scrabble to crosswords to Wordle. In her last week, she helped Mike with a Wordle puzzle. She and Wayne also enjoyed playing cards and board games—not so much for the activities themselves, although that was fun, but as an excuse to get together with friends.

Wayne and Sue remained close with their beloved friends. They enjoyed trips to Portugal Greece with Dale and Bruce McLeod and with Jack and Carol Thompson. Their travels also took them to Hawaii and Alaska. In the early years the “T” family often vacationed together at Pinestone Inn, cross-country skiing, and more recently, Wayne and Sue made excursions to the dog-friendly Cedargrove resort with Jann and Don McQuay. And everyone’s canines, of course. They also travelled with family—to Nova Scotia with Erin, Aaron and Lynn, and most recently to Costa Rica with Mike, Nancy, Madeline, Brooke and Julia. Sue had a natural curiosity and engagement with the world. She loved seeing nature in all its different forms (except snakes), and had many other adventures planned.

Sue left us too soon. The illness that took her moved fast. And, while we mourn her passing and the hole she has left in our lives, we can be grateful that the worst of the illness, the part that stopped her from living life the way she wanted to, did not last long. In her final days, she was surrounded nearly constantly by people who loved her. We all did what we could to make her journey easier, and we are grateful for the opportunity to have been there for this incredible woman, who spent her life being there for others.

The family is grateful for the excellent, compassionate care Sue received at Oshawa General Hospital and in lieu of flowers suggests donations to the Lakeridge Health Foundation, or an animal rescue charity of your choosing.

Messages of condolence and shared memories can be left for the family by visiting barnesmemorialfuneralhome.com

All rights reserved. This obituary is also archived at obittree.com